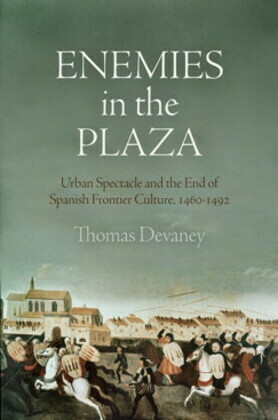 Enemies in the Plaza

by Thomas Devaney (Author)
Excerpt
Nonfiction History Medieval History by country Europe Spain
warning_amber
One or more licenses for this book have been acquired by your organisation details
EPUB
Unlimited loans, One at a time
Details

Toward the end of the fifteenth century, Spanish Christians near the border of Castile and Muslim-ruled Granada held complex views about religious tolerance. People living in frontier cities bore much of the cost of war against Granada and faced the greatest risk of retaliation, but had to reconcile an ideology of holy war with the genuine admiration many felt for individual members of other religious groups. After a century of near-continuous truces, a series of political transformations in Castile—including those brought about by the civil wars of Enrique IV's reign, the final war with Granada, and Fernando and Isabel's efforts to reestablish royal authority—incited a broad reaction against religious minorities. As Thomas Devaney shows, this active hostility was triggered by public spectacles that emphasized the foreignness of Muslims, Jews, and recent converts to Christianity.

Enemies in the Plaza traces the changing attitudes toward religious minorities as manifested in public spectacles ranging from knightly tournaments, to religious processions, to popular festivals. Drawing on contemporary chronicles and municipal records as well as literary and architectural evidence, Devaney explores how public pageantry originally served to dissipate the anxieties fostered by the give-and-take of frontier culture and how this tradition of pageantry ultimately contributed to the rejection of these compromises. Through vivid depictions of frontier personalities, cities, and performances, Enemies in the Plaza provides an account of how public spectacle served to negotiate and articulate the boundaries between communities as well as to help Castilian nobles transform the frontier's religious ambivalence into holy war.