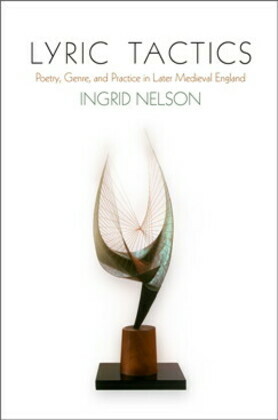 What shall we make of medieval English lyrics? They have no fixed line or meter, no consistent point of view, and their content may seem misaligned with the other texts in manuscripts in which they are found. Yet in Lyric Tactics, Ingrid Nelson argues that the lyric poetry of later medieval England is a distinct genre defined not by its poetic features—rhyme, meter, and stanza forms—but by its modes of writing and performance, which are ad hoc, improvisatory, and situational. Nelson looks at anonymous devotional and love poems that circulated in manuscripts of practical, religious, and literary material or were embedded in popular, courtly, and liturgical works. For her, the poems' abilities to participate in multiple modes of transmission are "lyric tactics," responsive and contingent modes of practice that emerge in opposition to institutional or poetic norms.

Working across the three languages of medieval England (English, French, and Latin), Nelson examines the tactics of poetic voice in the trilingual texts of British Library MS Harley 2253, which contains the well-known English "Harley lyrics." In a study of the English hymns and French lyrics of the commonplace book of William Herebert, she unearths the moral implications of lyric tactics for the friars who produced and disseminated them. And last, she examines the work of Geoffrey Chaucer and shows how his introduction of Continental poetic forms such as the balade and the rondeau suggests continuity with rather than a break from earlier English lyric. Combining literary analysis, manuscript studies, and cultural history with modern social theory, Ingrid Nelson demonstrates that medieval lyric poetry formed a crucial part of the fabric of later medieval English society.