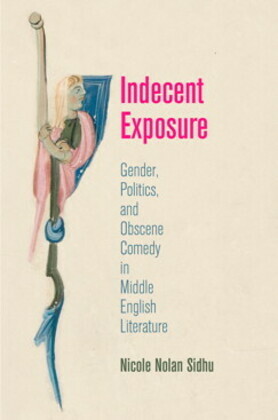 by Nicole Nolan Sidhu (Author)
Excerpt
Nonfiction Literary essays Social science Sociology
warning_amber
One or more licenses for this book have been acquired by your organisation details
EPUB
Unlimited loans, One at a time
Details

Men and women struggling for control of marriage and sexuality; narratives that focus on trickery, theft, and adultery; descriptions of sexual activities and body parts, the mention of which is prohibited in polite society: such are the elements that constitute what Nicole Nolan Sidhu calls a medieval discourse of obscene comedy, in which a particular way of thinking about men, women, and household organization crosses genres, forms, and languages. Inviting its audiences to laugh at violations of what is good, decent, and seemly, obscene comedy manifests a semiotic instability that at once supports established hierarchies and delights in overturning them.

In Indecent Exposure, Sidhu explores the varied functions of obscene comedy in the literary and visual culture of fourteenth- and fifteenth-century England. In chapters that examine Chaucer's Reeve's Tale and Legend of Good Women; Langland's Piers Plowman; Lydgate's Mumming at Hertford, Troy Book, and Fall of Princes; the Book of Margery Kempe, the Wakefield "Second Shepherds' Play"; the Towneley "Noah"; and other works of drama, Sidhu proposes that Middle English writers use obscene comedy in predictable and unpredictable contexts to grapple with the disturbances that English society experienced in the century and a half following the Black Death. For Sidhu, obscene comedy emerges as a discourse through which writers could address not only issues of gender, sexuality, and marriage but also concerns as varied as the conflicts between Christian doctrine and lived experience, the exercise of free will, the social consequences of violence, and the nature of good government.