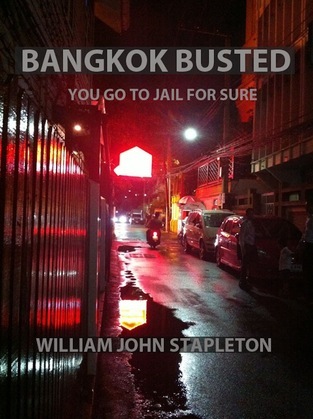 Bangkok Busted You Go to Jail for Sure

Of all the thousands of stories he had written across his lifetime, author and journalist William John Stapleton had never been happier to write the words "The End" than when he completed The Twilight Soi series with the short book "Bangkok Busted: You Go To Jail For Sure".

The series began in an anguished state after the author wrote a book detailing the decline of Bangkok's famous strip of go-go boy bars known as Soi Twilight, a narrow street adjacent to Bangkok's oldest red light district Patpong and telling the deeply personal, embarrassing and hurtful story of being ripped off by one of the streets better known denizens.

Much had changed in the two years since he began the series.

The writer finally got his pet project, A Sense of Place Publishing off the ground and finally settled in his current city of choice, Bangkok.

But one thing that did not change was the vengeful pursuit of those who did not want to succeed.The book exposes routine robbery of tourists, issuing of death threats to those who did not voluntarily walk away after being stolen from and the tentacles of corruption that ran up and down from the colourful neon lit strip known as Soi Twilight.