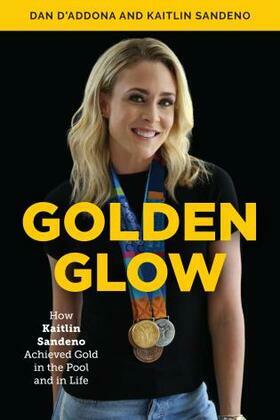 Kaitlin Sandeno is a world champion swimmer, Olympic gold medalist, and former world record holder. Now she uses her platform to help others, as the national spokesperson for the Jessie Rees Foundation, a coach for local youth teams, and general manager of the DC Trident.

Kaitlin Sandeno was one of the world’s greatest and most versatile swimmers. Competing at the 2000 and 2004 Olympics, she was a part of the world record breaking 4x200-meter relay team and is one of an elite few to medal in three different strokes.

Golden Glow: How Kaitlin Sandeno Achieved Gold in the Pool and in Life recounts Sandeno’s amazing swimming career—including her spectacular Olympic performances—and details the impact she has made in the world outside the pool. Breaking into the Olympics at seventeen years old, she became the face of the team with her enthusiasm and bubbly personality. She returned to the Olympics four years later to have one of the most dominating meets by an American woman in history. But Sandeno’s legacy in the pool is nothing compared to how she has used her platform to help those around her. She is the national spokesperson for the Jessie Rees Foundation and spreads joy around the country to children fighting cancer. She has emceed Olympic trials, hosted multiple shows for USA Swimming, and has given back to her sport, as a coach of youth teams and now as general manager of the International Swimming League's DC Trident.

Golden Glow is not only the story of how hard work and perseverance led Sandeno to Olympic gold but also how she has used her success in the pool to inspire those around her.