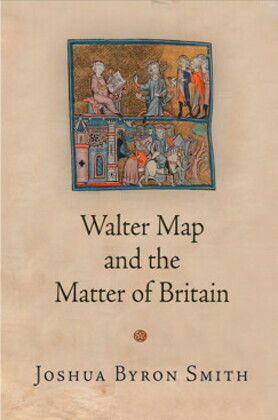 Walter Map and the Matter of Britain

by Joshua Byron Smith (Author)
Excerpt
Nonfiction Literary essays History Medieval
warning_amber
One or more licenses for this book have been acquired by your organisation details
EPUB
Unlimited loans, One at a time
Details

Why would the sprawling thirteenth-century French prose Lancelot-Grail Cycle have been attributed to Walter Map, a twelfth-century writer from the Anglo-Welsh borderlands known for his stinging satire, religious skepticism, ghost stories, and irrepressible wit? And why, though the attribution is spurious, is it not, in some ways, implausible?

Joshua Byron Smith sets out to answer these and other questions in the first English-language monograph on Walter Map—and in so doing, he offers a new explanation for how narratives about the pre-Saxon inhabitants of Britain, including King Arthur and his knights, first circulated in England. Smith contends that it was inventive clerics like Walter, and not traveling minstrels or professional translators, who popularized these stories. Smith examines Walter's only surviving work, the De nugis curialium, to demonstrate that it is not the disheveled text that scholars have imagined but rather five separate works in various stages of completion. This in turn provides new evidence to support his larger contention, that ecclesiastical networks of textual exchange played a major role in exporting Welsh literary material into England.

Medieval readers incorrectly envisioned Walter withdrawing ancient Latin documents about the Holy Grail from a monastery and compiling them in order to compose the Lancelot-Grail Cycle. In this detail they were wrong, Smith acknowledges, but a model of literary transmission that is not vernacular and popular but Latinate and ecclesiastical demands our serious consideration.