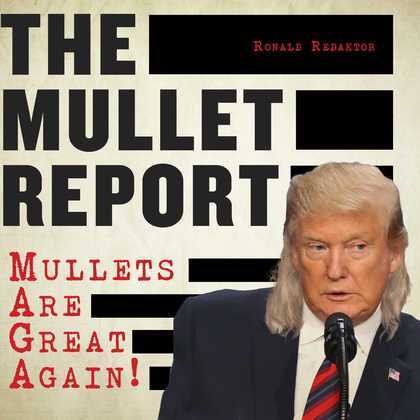 Donald Trump Says Mullets Are Back, and They're Gonna Be YUGE!

First it was The Mueller Report, and now, finally, the long-awaited Mullet Report is here, with all the shocking photos you've been waiting for. Long mullets, curly mullets, orange mullets . . . it's all here, with as few redactions as possible (without compromising national security and ongoing investigations). Robert Mueller investigated Russian collusion, but Ronald Redaktor will let you in on the secrets of the Hair Investigation. Find out about hair dumping and hacking operations, and decide for yourself if there was any brushin' collusion.

Donald Trump's hair has long been the subject of intense scrutiny. We've heard a lot about obstruction of justice. Well, what is he hiding up there? Is it detachable? Why is it orange? In response, Trump has launched his own #MulletStyle campaign, which in itself has become the subject of conspiracy theories and in-depth investigation. Now you can separate fact from alternative fact with this newly released and highly anticipated Mullet Report.