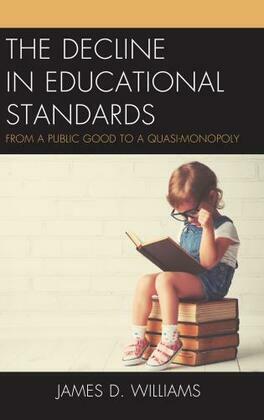 The Decline in Educational Standards

The Decline in Educational Standards: From a Public Good to a Quasi-Monopoly is about the “commodification” of education and the factors that have changed education from a public good into a “commodity” over the last 50 years. When we look at today’s education, we see that academic standards in public education have been declining for decades even as education funding has reached nearly a trillion dollars per year to fund such failed programs as No Child Left Behind and Common Core. Simultaneously, tuition and fees at public universities have increased nearly 2000 percent over the last 30 years, and student loan debt is now a staggering $1.5 trillion. Quite simply, education has become big business.


This book examines the various issues associated with the commodification of education, especially neoliberalism and privatized Keynesianism—what they are, how they developed, and how they have affected education and public policy. It argues that neoliberalism and the related socioeconomic shift to “debt-based consumerism” are at the center of commodification, leading to a significant decline in the exchange value of a college degree. It also argues that we cannot understand the changes in our public and higher education systems without examining the historical, social, economic, and political factors that have essentially created an education system that is significantly different from what it was in the not so distant past.