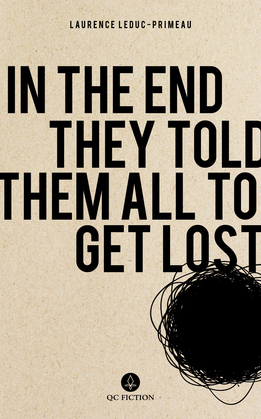 In the End They Told Them All to Get Lost

We're never quite sure what made Chloé take a flight to an unnamed country in South America. This series of short vignettes provides a glimpse of her scattered thoughts as she attempts to adjust to life in a new setting. Amidst the quirky observational humour of her internal monologue, a story of loneliness emerges, as she tries to form meaningful connections in her new surroundings.

Laurence Leduc-Primeau is Montreal born and bred. In the End They Told Them All to Get Lost is her first novel and the first to be translated. In 2018 she published Zoologies with La Peuplade.

"a daring, raw and engaging narrative ... The translator has done a fine job in rendering the rangy, demotic voice of this narrator: the prose never drags its heels." (Simon Lavery, Tredynas Days)