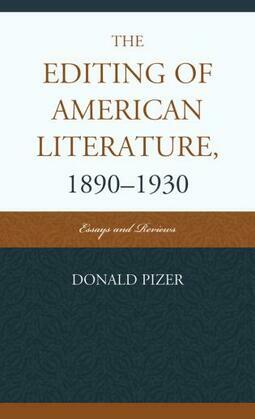 The Editing of American Literature, 1890-1930: Essays and Reviews

The Editing of American Literature, 1890-1930 collects Donald Pizer’s essays and reviews that examine the issues associated with providing authoritative scholarly editions of major turn-of-the-century American authors. Divided into four sections—general essays on editing; essays and reviews on the editing of Theodore Dreiser; essays and reviews on the editing of Stephen Crane; and essays on the interplay of textual theory and critical interpretation in works by Crane and John Dos Passos—the volume expresses a distinctive position in the text wars that dominated the editing scene of the 1970-2000 period. This collection of essays will be of interest to textual editors of any persuasion as well as literary critics and scholars with a special interest in late 19th- and early 20th-century American literature.