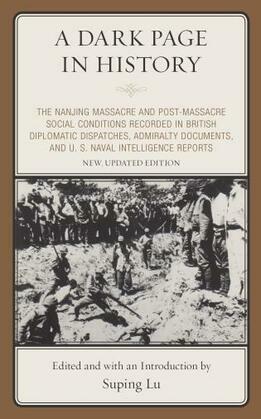 A Dark Page in History

About three weeks after Japanese troops captured Nanjing when the worst of the atrocities was over, American diplomats were allowed to return to the city to re-open their embassy on January 6, 1938. Three days later, British and German diplomats arrived by HMS Cricket on January 9. Since their arrival, the diplomats continuously dispatched cables, reports, and documents reporting conditions in the city, including Japanese atrocities, reign of terror, economic situation, living conditions, and other aspects of social life. These diplomatic records prove to be a treasure trove of invaluable primary source material for research and study on the Nanjing Massacre from unique perspectives.

A Dark Page in History is a collection of British diplomatic documents, Royal Navy reports of proceedings, and US naval intelligence weekly reports. The collection is invaluable as these newly unearthed primary source materials undoubtedly enhance our knowledge and understanding of the scope and depth of the Nanjing Massacre. In addition to updated and newly added annotations, included in this new edition are six maps, along with appendices consisting of USS Oahu December 1937 log book and a report by Frank Pruit Lockhart, US Consul-General at Shanghai, transmitting 13 photos of Japanese atrocities on September 16, 1938.