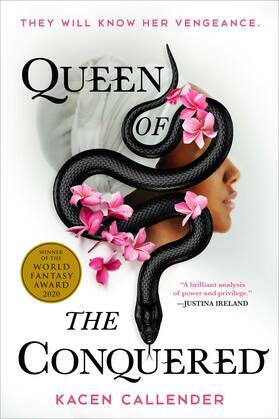 Queen of the Conquered

Islands of Blood and Storm #1
by Kheryn Callender (Author)
Fiction Fantasy Historical American and Canadian literature
An ambitious young woman with the power to control minds seeks vengeance against the royals who murdered her family, in a Caribbean-inspired fantasy world embattled by colonial oppression.
Sigourney Rose is the only surviving daughter of a noble lineage on the island nation of Hans Lollik. Her family was known to have sympathized with the island's colonizers -- and were brutally murdered. Adopted by a powerful duke, Sigourney spent her adolescence hiding in plain sight, practicing her magic, and plotting to avenge her family.
When she comes of age, Sigourney eagerly follows in her family's footsteps, joining the ranks of the ruling colonizers who still hold the islands in their grasp. With her unique ability to control and read minds, she doesn't fear being deemed a traitor by her own people or the assassination attempts and rebellions she faces across the land. But when she arrives at court, ready to seek vengeance and take control of all the islands, she finds herself the target of a dangerous unknown magic.
Someone is killing off the ruling families to clear a path to the throne. As the bodies pile up and all eyes regard her with suspicion, Sigourney must find allies among her prey and the murderer among her peers... lest she become the next victim.