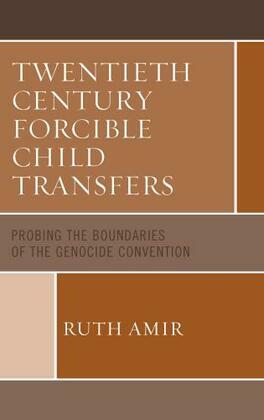 The current surge of displaced and trafficked children, child soldiers, and child refugees rekindles the virtually dead letter of the Genocide Convention prohibition on transferring children of one group to another.

This book focuses on the gap between genocide as a legal term and genocidal forcible child transfer as a catastrophic experience that disrupts a group’s continuity. It probes the Genocide Convention’s boundaries and draws attention to the diverse, yet highly similar, patterns of forcible child transfers cases such as colonial genocide in the US, Canada, and Australia, Jewish-Yemeni immigrants in Israel, children of Republican parents during the Spanish Civil War and its aftermath, and Operation Peter Pan in Cuba. The analysis highlights the consequences of the under-inclusive protection granted only to four groups.

Ruth Amir argues effectively for the need to add an Amending Protocol to the Genocide Convention to protect from forcible transfer to children of any identifiable group of persons perpetrated with the intent to destroy the group as such. This proposed provision together with Communications and Rapid Inquiry Procedures will highlight the gravity of forcible child transfers and contribute to the prevention and punishment of genocide.