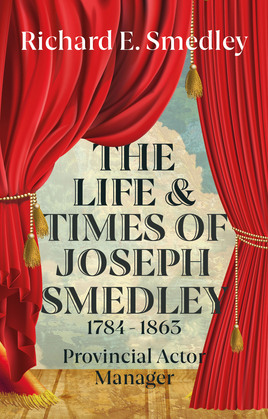 The Life and Times of Joseph Smedley

This is the true story of the life of Joseph Smedley. He was an actor, initially with the Lincoln theatre and its circuit from just after the turn of the nineteenth century, and covers his decision to form his own company, with his new wife, and to tour theatres in Humberside and the East Midlands. The Life And Times Of Joseph Smedley looks at what it was like to be a strolling player in the first half of the nineteenth century, how he used his growing family to fill roles in his repertoire of plays, and the problems he faced in making a living as an actor. The book examines the people of the day, including the Robertsons who ran the theatres in Lincoln, Nottingham and Derby and their circuits; the actors, and those who contributed to his work, and his efforts from the beginning both to survive, and to build one of the largest touring circuits in the country; and looks at events of those times which affected him, his family and his company of actors. The Life And Times Of Joseph Smedley shows how he tried to treat people fairly, and how he tried to achieve a reputation for honesty and good behaviour in members of his company, and how he attempted to elevate his profession from its maligned reputation for drunkenness and debauchery into one of a "school of eloquence, a Temple of the Arts".