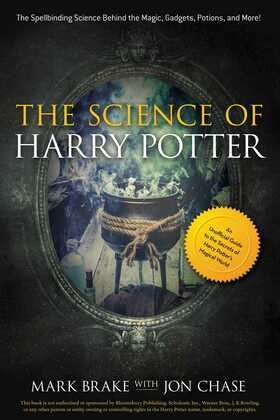 The Science of Harry Potter

How does magic in J. K. Rowling’s universe work? Finally, the scientific secrets are revealed!

The story of the boy who lived has brought the idea of magic and sorcery into mainstream fruition more than any other book series in history. Modern muggle scientists have uncovered explanations to the seemingly impossible, including answers to such questions as:

Often perceived as a supernatural force, magic captivates and delights its audience because of its seeming ability to defy physics and logic. But did you ever wonder if science has any explanation for these fantastic feats?

The Science of Harry Potter examines the scientific principles—behind some of your favorite characters, spells, items, scenes, and even games like Quidditch and Wizard’s Chess—from boy wizard Harry Potter’s world, providing in-depth analysis and scientific facts to support its theories. Author Mark Brake, whose The Science of Star Wars was a knockout success, has found the answers to satisfy the curious spirits of muggles everywhere…

A perfect Harry Potter gift for anyone obsessed enough to stand in line to be the first to see Harry Potter and the Cursed Child or Fantastic Beasts and Where to Find Them, witches and wizards alike will be fascinated by the merging of this improbable realm and real science!