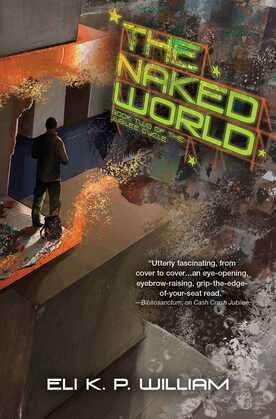 In a world stripped bare of digital images and promotainment, unveiled with the audiovisual overlay of the ImmaNet, in an exposed world, a naked world, Amon Kenzaki awakens, lost and alone. He must now travel deep into the District of Dreams in search of Rashana Birla, the one person that might help him unravel the mystery of jubilee. But deprived of the apps and informational tools he?s depended on his entire life, traversing the largest bankdeath camp on Earth is no easy task.

Inside an ephemeral labyrinth of slowly-dissolving disposable skyscrapers clogged to the limit with the bankdead masses, Amon soon finds himself face to face with two dangerous groups: a cult called the Opportunity Scientists, who preach bizarre superstitions about economic salvation, and a supposedly humanitarian organization called the Philanthropy Syndicate, whose mandate of serving the poor conceals rapacious motives.

Amon takes refuge in Xenocryst, a community that genuinely strives to improve conditions in the camps, where he begins to work towards its cause and reconciles himself to his newfound poverty. But when political forces threaten the community?s existence and the lives of its members, he is forced to team up with a vending-machine designer, an Olympic runner, a fertility researcher, a corporate tycoon, and many others to expose the heinous secret festering at the heart of the action-transaction market he once served.

In book two of the Jubilee Cycle, Eli K. P. William delves beneath the surface of his cyber-dystopian Tokyo to unearth the fate of outcasts trapped in its depths and shine a light on the financial obstacles blocking one individual?s efforts to help them.