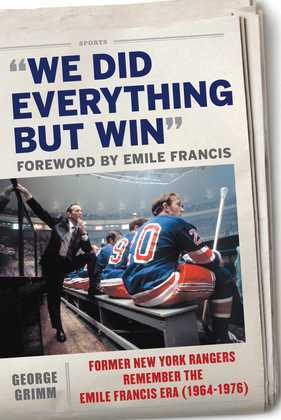 We Did Everything But Win

We Did Everything But Win: An Oral History of the Emile Francis Era New York Rangers (1964?1976) is an entertaining account of one of the most exciting and unforgettable periods in the history of the Broadway Blueshirts as told by Francis as well as several of his players.

George Grimm chronicles each season of the Francis era when ?The Cat? transformed them from perennial league doormats to a team that made it to the Stanley Cup playoffs for nine consecutive seasons, including a Finals appearance in 1972. There are also chapters detailing Emile?s playing career and his hiring as general manager as well as the aftermath of his dismissal and an analysis of his tenure behind the bench and as GM. It was during those years that the National Hockey League doubled in size and the Rangers moved into a brand-new Madison Square Garden. As the popularity of the National Hockey League skyrocketed, who could forget the Rangers? battles on the ice with Boston?s Big Bad Bruins and Philadelphia?s Broad Street Bullies and showdowns with the Montreal Canadiens and Chicago Black Hawks? All the great moments are here including a heart-stopping, triple-overtime victory in the 1971 playoffs and Vic Hadfield?s 50th goal the following season.

We Did Everything But Win is a tribute to the Rangers of that era; Jacques Plante and Marcel Paille, Eddie Giacomin and Gilles Villemure, Harry Howell and Jim ?The Chief? Neilson, ?The Old Smoothies,? the ?G-A-G Line,? and the ?Bulldog Line.? It?s the story of colorful players with nicknames like ?Boomer,? ?Stemmer,? and ?Sarge? and fan favorites such as Brad Park, Rod Gilbert, Jean Ratelle, Walt Tkaczuk. It?s all here?the highs and the lows, the inspiring victories, the devastating losses, and the funny moments along the way.