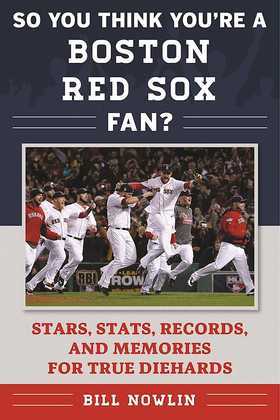 So You Think You're a Boston Red Sox Fan?

So You Think You?re a Boston Red Sox Fan? tests and expands your knowledge of Red Sox baseball. Rather than merely posing questions and providing answers, you?ll get details behind eachstories that bring to life players and coaches, games and seasons.

This book is divided into multiple parts, with progressively more difficult questions in each new section. Along the way, you?ll learn more about the great Red Sox players and coaches of the past and present, from Ted Williams, Carl Yastrzemski, Carlton Fisk, and Roger Clemens to Pedro Martinez, Jason Varitek, David Ortiz, Dustin Pedroia, and so many more. Some of the many questions that this book answers include:

What was the team nickname before it was the Red Sox?
Who leads the Red Sox in ejections?
Which Red Sox manager, who ran the team for at least 200 games, had the best winning percentage?
Who holds the record for most stolen bases in a season?
What former Red Sox player later became a candidate for President of the United States under the Rhinoceros Party ticket?
This book makes the perfect gift for any fan of the BoSox!