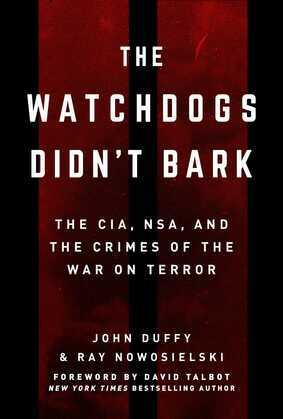 The shocking reexamination of the failures of US government officials to use available intelligence to stop the attack on American on September 11, 2001. “The authors lay bare…an intelligence failure of historic proportions.”—John Kiriakou, former CIA officer, author, The Convenient Terrorist

In 2009, documentarians John Duffy and Ray Nowosielski arrived at the offices of Richard Clarke, the former counterterror adviser to Presidents Clinton and Bush. In the meeting, Clarke boldly accused one-time Central Intelligence Agency director George Tenet of “malfeasance and misfeasance” in the pre-war on terror. Thus began an incredible—never-before-told—investigative journey of intrigue about America’s intelligence community and two 9/11 hijackers.

The Watchdogs Didn’t Bark details that story, unearthed over a ten-year investigation. Following the careers of a dozen counterterror employees working in different agencies of the US government from the late 1980s to the present, the book puts the government’s systems of oversight and accountability under a microscope. At the heart of this book is a mystery: Why did key 9/11 plotters Khalid Al Mihdhar and Nawaf Al Hazmi, operating inside the United States, fall onto the radars of so many US agencies without any of those agencies succeeding in stopping the attacks?

The answers go beyond mere “conspiracy theory” and “deep state” actors, but instead find a complicated set of potential culprits and an easily manipulated system. Taking readers on a character-driven account of the causes of 9/11 and how the lessons of the attacks were cynically inverted to empower surveillance of citizens, kidnapping, illegal imprisonment, torture, government-sanctioned murder, and a war on whistleblowers and journalists, an alarm is raised which is more pertinent today than ever before.