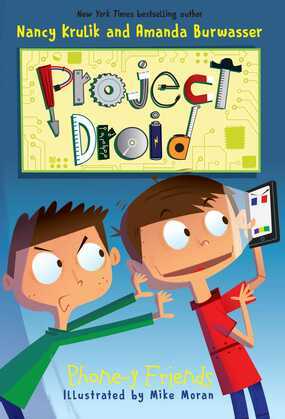 Logan auditions for the school play and is chosen for the role of Chipmunk Number Three, but unfortunately, Java, Logan's robot cousin, doesn't get a part, which means he and Logan won't be hanging out together every day after school. Logan's excited to have something to himself and starts spending more and more time with his new friends.

Now with so much time on his hands, Java is determined to make some new friends, too--the dishwasher, the electric mixer, the refrigerator . . . But his favorite new friend is Spike, the voice activated program on Mrs. Applebaum's cell phone.

While Java can't be in the play, he ends up helping out with building the sets, and almost blows his cover! But when Logan freezes and forgets his lines on stage, and Java (who has memorized them in an instant) feeds them to him the Cyrano-style, it's the android who saves the day. After all, that's what friends are for.

Internationally bestselling author Nancy Krulik and her incredibly talented daughter, Amanda Burwasser, spin hilarious high jinks in the fourth book in the Project Droid series, which combines the literalness of Amelia Bedelia with a wacky modern edge, making for hours of laughter. And the fun continues with an activity in the back!