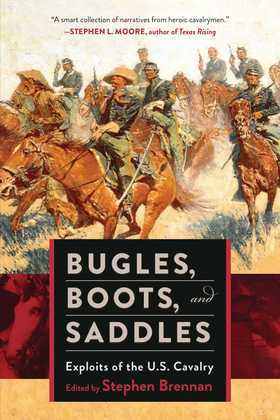 A history of America’s military on horseback.

For three thousand years, the horse soldier has played a key role in both war fighting and in peace keeping all over the world, not only as a highly mobile strike force in battle but also as an instrument of reconnaissance and occupation, exploration, and irregular warfare.

The American tradition of the mounted warrior is a proud one. But in the first days of our revolution, it looked as if George Washington was prepared to dispense with the use of mounted troops altogether. Eventually he saw their value, and over the next hundred years the cavalry adapted itself to the needs and imperatives of the growing nation. This is the story of the US Cavalry.

In Bugles, Boots, and Saddles you’ll be able to ride along with heroes from years past, including:

“Light-Horse Harry” Lee and his legion in the Revolutionary War
Custer at Gettysburg, at the Battle of the Wabash, and at Little Big Horn
Crook in pursuit of the Apache chieftain Geronimo in 1880s Arizona
Teddy Roosevelt and the Rough Riders at San Juan (Kettle) Hill
And many more

Bugles, Boots, and Saddles tells not only the history of our military, but also how we gained so much success due to the horse soldier. With an appendix on the daily life of US Cavalrymen, Brennan gives all the detail that any military historian would want to see.