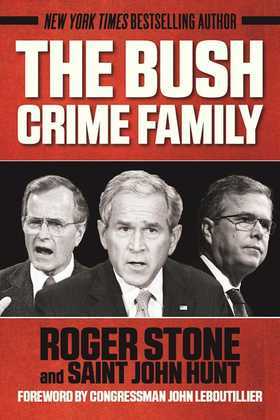 The Bush Crime Family smashes through the layers of lies and secrecy that have surrounded and protected our country?s most successful political dynasty for nearly two centuries. New York Times bestselling author Roger Stone lashes out with a blistering indictment, exposing the true history and monumental hypocrisy of the Bushes. In Stone?s usual go for the jugular? style, this is a no-holds-barred history of the Bush family, comprised of smug, entitled autocrats who both use and hide behind their famous name. They got a long-overdue taste of defeat and public humiliation when Jeb?s 2016 presidential bid went down in flames.

Besides detailing the vast litany of Jeb?s misdeeds including receiving a $4 million taxpayer bailout when his father was vice president as well as his startlingly-close alignment with supposed enemy? Hillary Clinton Stone travels back to Bush patriarchs Samuel and Prescott, right on through to presidents George H. W. and George W. Bush to weave an epic story of privilege, greed, corruption, drug profiteering, assassination, and lies. A new preface to this paperback edition features explosive information, including the family?s Machiavellian plan to propel Jeb?s son George Prescott Bush forward as the family?s next political contender.

The Bush Crime Family will have readers asking, Why aren?t these people in prison??