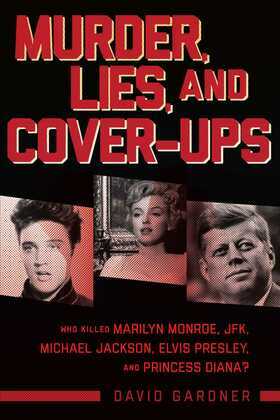 Uncover the real truth behind mass media accounts of how they died, and learn the reason for their murders.
These five deaths stopped the whole world in its tracks. We all famously recall where we were and what we were doing when JFK was assassinated, as well as the moments Elvis, Princess Diana, and Michael Jackson died. As for Marilyn Monroe, the candle flickered out long ago, but only now can the truth be told about how?and why?she died.
After combing through thousands of recently declassified FBI files and interviewing key witnesses, crime analysts, and forensic experts during years of research, investigative writer David Gardner has unearthed new information that will transform the way we look at these iconic tragedies that have long fascinated and intrigued the general public. Murder, Lies, and Cover-Ups reveals that Elvis Presley died not as a self-obsessed caricature but as a genuine hero who may have signed his death warrant going undercover for the FBI; how Marilyn Monroe's secret affairs with JFK and his brother, Robert, left her in the crosshairs of a lethal conspiracy; why Princess Diana's death was no accident; who ordered President John F. Kennedy's assassination; and how on three occasions Michael Jackson “died” of painkiller drug overdoses in the months before his death.
In the wake of new evidence and testimonies, Murder, Lies, and Cover-Ups provides many of the answers that have been elusive for so long, while explaining what it was about these enduring legends that made their legacies burn so bright.