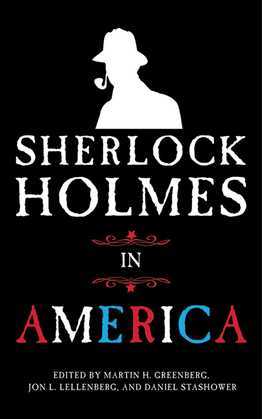 The world’s greatest sleuth makes his American debut in this groundbreaking collection of never-before-published mystery stories set in the US.
The world’s greatest detective and his loyal sidekick Dr. Watson are on their first trip across the Atlantic—to nineteenth-century America! From the bustling neighborhoods of New York City and Boston to sinister locales like Salt Lake City and fog-shrouded cities like San Francisco, the beloved British sleuth faces the most cunning criminals America has to offer, while meeting some of her most famous figures along the way, such as Teddy Roosevelt and Harry Houdini.
A groundbreaking anthology, Sherlock Holmes in America features original short stories by award-winning American writers, each in the extraordinary tradition of Conan Doyle, and each with a unique American twist that is sure to satisfy and exhilarate both Sherlock Holmes purists and those who wished Holmes could nab the nefarious closer to home. There is:

This is a must-read for any mystery fan and for those who have followed Holmes' illustrious career over the waterfall and back again.