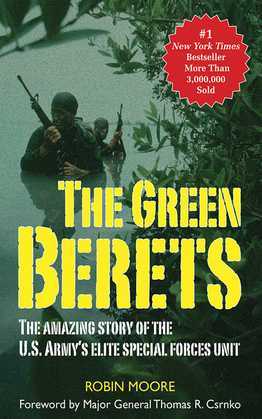 In Vietnam, Robin Moore became on the of the first true embedded" journalists, training and fighting alongside America's most elite fighters. Though fictionalized, The Green Berets exposed the American public to the horrors of the ground war in Vietnam, and gave the men of the Green Berets the recognition they deserved.

Here is the tale of the courageous South Vietnamese girl posing as an anti-American Communist to capture the Viet Cong officer who murdered her family. Here is the graft and double-dealing of South Vietnamese officers undercutting America's war effort. More importantly, here are America's soldiers showing unimaginable bravery in the face of a determined and deadly enemy.

With a foreword by Major General Thomas R. Csrnko reflecting on the history and future of this elite fighting unit, The Green Berets stands as an enduring classic.

One of the most exciting war books." London Sunday Telegraph