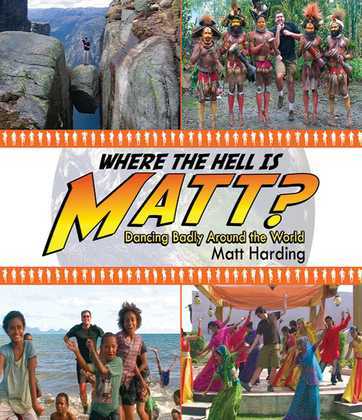 Where the Hell is Matt?

Matt Harding created an Internet sensation with his awkward, limb-flailing dance of joy. His travels, and his bad dancing, have been viewed online nearly 75 million times. It started as a lark on a curbside in Hanoi, Vietnam. He did it for fun, but Matt?s irreverent spirit caught on, and soon thousands all over the world were joining him in a simple expression of what we all, as humans, have in common. In his first book, a full-color travelogue, Matt shares, with refreshing honesty and wit, the adventure of creating his videos. He tells of jumping into the ocean with a humpback whale, sledding down a hill in Antarctica, and hitchhiking across the Skeleton Coast desert with a spare tire under one arm. Matt also reveals the unlikely story of how his passion for travel led to Internet stardom, a corporate sponsor, and an odd little pop culture phenomenon that strikes a deep emotional chord.

His book, like his videos, offers us a chance to share his unique experiences as he walks us through how he became the first person to dance with the world.