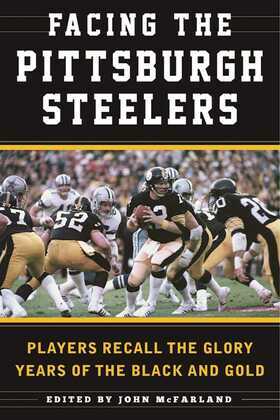 Even die-hard fans of the Pittsburgh Steelers can only imagine what it was like to play against the premier teams and players in the black and gold’s history. Just how hard did Jack Lambert hit? How did opponents plan for Franco Harris’s combination of speed and power? What was it like trying to block Joe Greene and Dwight White? What was the feeling seeing a Ben Roethlisberger pass soaring downfield toward Hines Ward, or Troy Polamalu taking a bead on a receiver cutting over the middle?

In Facing the Pittsburgh Steelers, John McFarland takes Steelers fans inside the locker rooms, onto the sidelines, and out on the field with opposing players. McFarland interviews some of the biggest names in the game to get their perspectives on playing against the best teams in Steelers history. He covers the most dramatic moments, most intense rivalries, and most memorable games from Pittsburgh’s pro football lore—from the other side of the line of scrimmage.

It’s been said that seeing is believing. With Facing the Pittsburgh Steelers, Pittsburgh fans can go beyond seeing to hear what it was like to play against the greatest Steelers teams, in the words of players who did just that.

Skyhorse Publishing, as well as our Sports Publishing imprint, are proud to publish a broad range of books for readers interested in sports—books about baseball, pro football, college football, pro and college basketball, hockey, or soccer, we have a book about your sport or your team.