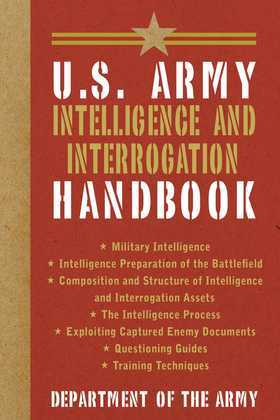 The U.S. Army Intelligence and Interrogation Handbook builds upon existing doctrine and moves interrogation into the twenty-first century within the constraints of the Uniform Code of Military Justice and the Geneva Conventions. Principles, guidelines, and topics covered include:

The definition of interrogation
Interrogator capabilities and limitations
Warfighting doctrine
The intelligence cycle, and its disciplines and operations
Amphibious and airborne operations
The interrogation process
Exploiting captured enemy documents
A tactical questioning guide
And many more tactics and techniques used by the U.S. Army!