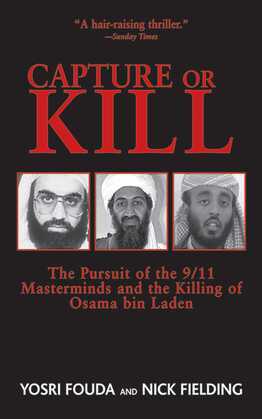 Khalid Shaikh Mohammed and Ramzi Binalshibh, two of bin Laden?s key lieutenants: the masterminds behind the attacks of September 11. Based on the only interview these masterminds of terror ever gave to the media as well as extensive follow-up research, Capture or Kill may be the closest we will get to the full inside story of the plot. While Mohammed and Binalshibh were among the world?s most wanted men and hiding in a safe house in Pakistan, they summoned star al-Jazeera TV reporter Yosri Fouda for a one-of-a-kind exclusive. Fouda knew he might well be walking into a trap, as Wall Street Journal reporter Daniel Pearl had done only months before.

He took the risk, and, for forty-eight hours, Fouda listened as Mohammed, head of al-Qaeda?s military committee, and Binalshibh, the link between Mohammed Atta and the senior al-Qaeda leadership, proudly claimed responsibility for the attacks on New York and the Pentagonthe first time al-Qaeda took direct responsibilityand detailed for the first time exactly how the plot was conceived and executed.

The authors, uniquely positioned because of their prior unprecedented access and research, deliver a thrilling account of what has happened since. What has changed in the intervening years to this insidious global network? How does Osama bin Laden?s capture and death affect its continuing operation? This is a must-read for anyone who wants to know not only the full truth behind September 11, but also the implications of recent events for the future of global security.