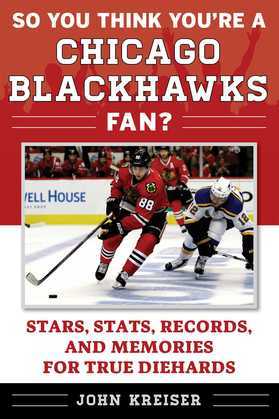 So You Think You're a Chicago Blackhawks Fan?

So You Think You’re a Chicago Blackhawks Fan? tests and expands your knowledge of Blackhawks hockey. Rather than merely posing questions and providing answers, you’ll get details behind each?stories that bring to life players and coaches, games and seasons.

This book is divided into multiple parts, with progressively more difficult questions in each new section. Along the way, you’ll learn more about what has made the Hawks one of the most popular teams in the NHL. The book includes players and coaches of the past and present, from Stan Mikita to Bill Mosienko, Bobby Hull, Pierre Pilote, Glenn Hall, Tony Esposito, Ed Belfour, Jim Pappin, Keith Magnuson, Jeremy Roenick, Chris Chelios, Denis Savard, Corey Crawford, Jonathan Toews, and so many more. Some of the many questions that this book answers include:

• A Chicago star of the 1950s set an NHL record that may never be broken by scoring three goals in 21 seconds in a game against the New York Rangers at Madison Square Garden on March 23, 1952. Who is he?
• Which Blackhawks legend appeared in the movies Wayne’s World? and Wayne’s World 2?
• True or false: The National Football League once played its championship game in Chicago Stadium?
• Patrick Kane set a franchise record in 2015?16 when he had at least one point in 26 consecutive games. Which Chicago Hall of Famer held the previous team record with a 21-game points streak?

This book makes the perfect gift for any fan of the Hawks!