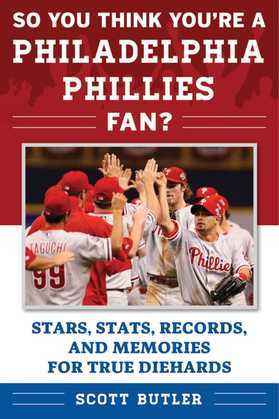 So You Think You're a Philadelphia Phillies Fan?

So You Think You?re a Philadelphia Phillies Fan? tests and expands your knowledge of Phillies baseball. Rather than merely posing questions and providing answers, you?ll get details behind eachstories that bring to life players and coaches, games and seasons.

This book is divided into multiple parts, with progressively more difficult questions in each new section. Along the way, you?ll learn more about the great Phillies players and coaches of the past and present, from Grover Alexander to Robin Roberts, Richie Ashburn, Jim Bunning, Dick Allen, Steve Carlton, Mike Schmidt, Pete Rose, Garry Maddox, Jamie Moyer, Chase Utley, Jimmy Rollins, Ryan Howard, and so many more. Some of the many questions that this book answers include:

Which former Phil has the highest WAR in team history?
Who holds the longest hitting streak (36 games) in team history?
Which pitcher holds the records for most complete games and hits allowed?
In what year were the team records set for hits, total bases, and runs scored?
In what year was the team record set for home runs allowed?
Who was the last Phillies pitcher to win the Cy Young Award?

This book makes the perfect gift for any fan of the Phils!