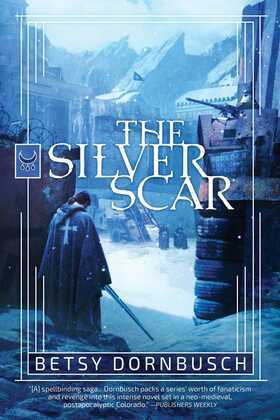 When Trinidad was twelve, his Wiccan parents blew themselves up in an ecoterr attack that killed several Christians. Orphaned and disillusioned, he fled his home?and his best friend Castile?to soldier for the powerful Christian church inside the walled city of Boulder, Colorado. Fostered by a loving priest and trained by a godless warrior, Trinidad learned the brutal art of balancing faith and war. He is the perfect archwarden, disciplined and devout. But when his Bishop turns up with a silver scar she claims is proof of angelic orders to crusade, Trinidad alone knows her story is a lie. The silver is from a mystical, ancient graveyard called the Barren?a place of healing reached only by Wiccan magic, a place that could turn Christianity on its head.

Accusing her outright is treason and gaining proof means committing heresy, both of which is a death sentence for an archwarden. Instead, torn between the lure of powerful magic, his love for Castile, and his vows to defend the Church, Trinidad secretly conspires with a violent tribe of ancestor-worshipers and a Wiccan coven to stop the crusade. But as everyone he trusts is mired in betrayal and bent on vengeance, he soon realizes no amount of righteousness can stop the slaughter of thousands.