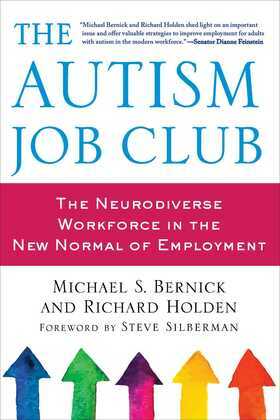 The Autism Job Club is a groundbreaking book for bringing adults with autism and other neuro-diverse conditions into the work world.
This second edition of The Autism Job Club includes a new Foreword by Steve Silberman, author of the best-selling NeuroTribes, along with an Afterword by the authors. The Afterword covers the many employment initiatives for adults on the autism spectrum launched just in the three years since the book was originally published.
The book has its basis in the autism job club that the authors have been part of in the San Francisco Bay Area, the job-creation and job-placement efforts the club has undertaken, and similar efforts throughout the United States.
The authors review the high unemployment rates among adults with autism and other neuro- diverse conditions more than two decades after the ADA. Bernick and Holden also outline and explain six strategies that, taken together, will reshape employment for adults with autism: the art of the autism job coach; the autism advantage in technology employment; autism employment and the internet economy; autism employment and the practical/craft economy; autism and extra-governmental job networks; autism and public service employment.
The Autism Job Club is a vital resource for adults with autism, their families, and advocates who are committed to neuro-diverse employment, not unemployment. But it also speaks to a far broader audience interested in how to carve out a place for themselves or others in an increasingly competitive job world.