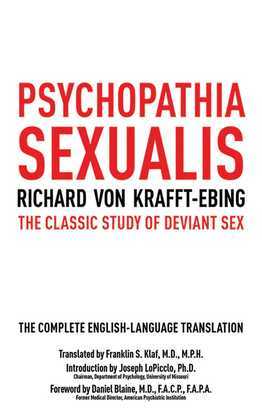 For almost one hundred years, Psychopathia Sexualis stood as the world’s most informative volume on the subject of sexual deviation. Arguably the most important precursor to Freud in the study of human sexuality, Krafft-Ebing introduced ideas and concepts that greatly influenced the works of Alfred Kinsey and Masters and Johnson. In his own time Krafft-Ebing was both praised and damned for this volume. Some psychiatrists denounced the work as an immoral apology for perversion and deviance, while others recognized the immense service the author had done for an unjustly neglected area of study. Although sometimes dated by the beliefs and state of knowledge of the time it was written, Psychopathia Sexualis is essential (and immensely entertaining) as one of the most important documents in humankind’s modern effort to understand itself.