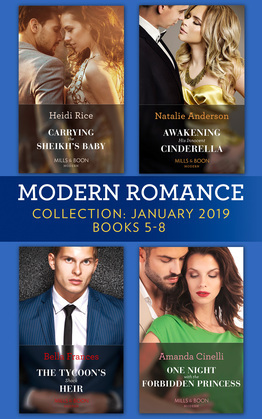 Soft-hearted Gracie James is mortified when Rafael Vitale finds her accidentally trespassing on his luxurious Italian estate! She can’t refuse Rafe’s teasing demand that she attend an exclusive party with him. From the dangerous intensity in his eyes virgin Gracie knows she’s playing with fire—after all, outrageous playboy Rafe is only promising a temporary liaison. But can she resist the power of his raw sensuality?

Carrying the Sheikh's Baby by Heidi Rice
When shy academic Cat Smith is hired as a researcher by Sheikh Zane she’s thrilled—and completely dazzled by their overwhelming chemistry! Cat knows a fling could compromise her professional credibility, but resisting Zane’s sensual caress feels utterly impossible. Until their passionate encounter has lasting consequences… And carrying the heir to the kingdom means one thing—Cat must become Zane’s Queen!

The Tycoon's Shock Heir by Bella Frances
Restoring his family’s legacy is all that’s important to Italian tycoon Matteo Rossini. Until captivating ballerina Ruby Martin tempts him to abandon his pursuit for a night of fiery pleasure! Yet when sweet Ruby confesses she’s pregnant, Matteo demands his child. But with the heat still burning between them, can Matteo ignore his desire for Ruby too?

One Night with the Forbidden Princess by Amanda Cinelli
Hired to secure a palace, the last thing billionaire bodyguard Roman Lazorov expects to find is a princess scaling the castle walls! Facing an arranged marriage, runaway Princess Olivia pleads with him to allow her just one week of freedom. Reluctantly he agrees, but secluded on his private Spanish island, Roman realizes his mistake— his attraction to Olivia is forbidden, but also explosively undeniable!