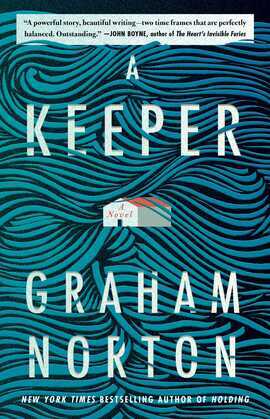 From Graham Norton?the BAFTA Award?winning Irish television host and author of the “charming debut novel” (New York Journal of Books) Holding?a masterly and haunting tale of secrets and ill-fated love follows a young woman as she returns to Ireland after her mother’s death and unravels the identity of her father.

When Elizabeth Keane returns to Ireland after her mother’s death, she’s focused only on saying goodbye to that dark and dismal part of her life. Her childhood home is packed solid with useless junk, her mother’s presence already fading. But within this mess, she discovers a small stash of letters?and ultimately, the truth.

Forty years earlier, a young woman stumbles from a remote stone house, the night quiet except for the constant wind that encircles her as she hurries deeper into the darkness away from the cliffs and the sea. She has no sense of where she is going, only that she must keep on.

With wistful and evocative prose, A Keeper is sure to appeal to “fans of sensitive character studies” (Publishers Weekly) and brilliantly illustrates Graham Norton’s clear-eyed understanding of human nature and its darkest flaws.