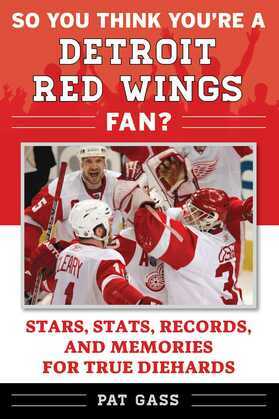 So You Think You're a Detroit Red Wings Fan?

So You Think You’re a Detroit Red Wings Fan? tests and expands your knowledge of Red Wings hockey. Rather than merely posing questions and providing answers, you’ll get details behind each?stories that bring to life players and coaches, games and seasons.

This book is divided into multiple parts, with progressively more difficult questions in each new section. Along the way, you’ll learn more about one of hockey’s Original Six teams. The book includes players and coaches of the past and present, from Gordie Howe to Steve Yzerman, Nicklas Lidström, Ted Lindsay, Terry Sawchuk, Chris Chelios, Chris Osgood, Red Kelly, Niklas Kronwall, Sid Abel, Marcel Pronovost, Alex Delvecchio, Dominik Hašek, Sergei Fedorov, and so many more. Some of the many questions that this book answers include:

• Who was the first Red Wings coach to win the Jack Adams Award as the NHL’s top coach?

• The Red Wings hold the NHL regular-season record with 62 wins. When did they set the record?

This book makes the perfect gift for any fan of the Red Wings!