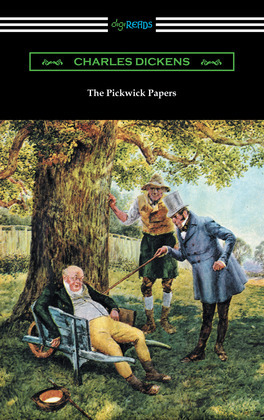 The Pickwick Papers (with an Introduction by Edwin Percy Whipple)

Charles Dickens?s first novel, ?The Pickwick Papers? was originally published in serial form between March 1836 and October 1837. Drawing on Dickens?s experience as a journalist and reporter in London and the surrounding countryside, the novel is a series of loosely related comical adventures of the members of the Pickwick Club, founded by the novel?s main character, Mr. Samuel Pickwick. Mr. Pickwick is a wealthy and bored old gentleman who suggests that he and the club members, Tracy Tupman, Augustus Snodgrass, and Nathaniel Winkle, venture outside London and report on their experiences to each other. From encounters with highwaymen, a duel, romantic escapades, and a brief stay in Fleet Prison, these wild and hilarious adventures form the basis of the novel?s plot. ?The Pickwick Papers? gained immense popularity and became one of the first publishing successes of the pre-Victorian era when the character of Sam Weller was introduced in Chapter Ten. Sam is hired on as Mr. Pickwick?s valet and his wise Cockney observations and advice stand in contrast to the naïve and unworldly Mr. Pickwick. Through its numerous well-loved characters and settings, the novel affords the reader a fascinating and entertaining glimpse into 19th century England. This edition includes an introduction by Edwin Percy Whipple and a biographical afterword.