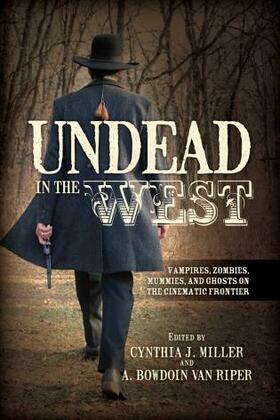 Undead in the West: Vampires, Zombies, Mummies, and Ghosts on the Cinematic Frontier

Undead in the West is a collection of essays that explore the many tropes and themes through which undead Westerns make the genre’s inner plagues and demons visible, and lay siege to a frontier tied to myths of strength, ingenuity, freedom, and independence. Featuring several illustrations and a filmography, the volume is divided into three sections: “Reanimating Classic Western Tropes” examines traditional Western characters, symbolism, and plot devices and how they are given new life in undead Westerns; “The Moral Order Under Siege” explores the ways in which the undead confront classic values and morality tales embodied in Western films; and “And Hell Followed with Him” looks at justice, retribution, and retaliation at the hands of undead angels and avengers.