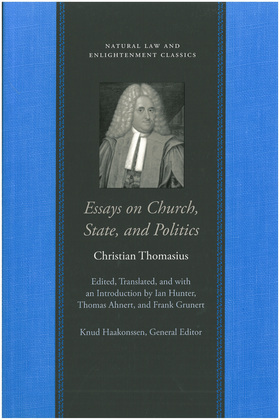 Essays on Church, State, and Politics

The works found in Essays on Church, State, and Politics, which originated as disputations, theses, and pamphlets, were direct interventions in the unresolved issue of the political role of religion in Brandenburg-Prussia, a state in which a Calvinist dynasty ruled over a largely Lutheran population and nobility as well as a significant Catholic minority.

Christian Thomasius (1655?1728) was a German philosopher and legal theorist.

Ian Hunter is Australian Professorial Fellow at the Centre for the History of European Discourses, University of Queensland, Australia.

Thomas Ahnert is a Senior Lecturer in History at the University of Edinburgh.

Please note: This title is available as an ebook for purchase on Amazon, Barnes and Noble, and iTunes.