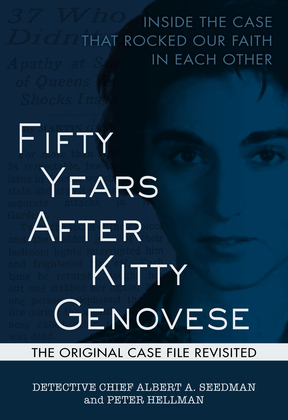 Five decades later, we’re still asking ourselves: “If I had been there, would Kitty have lived?”

Fifty years after she was viciously attacked in full view of several neighbors and within earshot of still more, the name of murder victim Kitty Genovese still conjures the ugly spectre of American apathy. “37 Saw Murder but Didn’t Call Police” ran the Times headline that created a legend. A thirty-eighth witness did call—“after much deliberation”—half an hour after the first attack left Kitty wounded on the street. By then, her killer had returned and finished the job: Kitty Genovese lay dying in a stairwell, just steps from the safety of her own apartment.

The apparent indifference of Kitty’s neighbors to her screams—and the cold-blooded calm of the killer who came back—fixed this case in the memory of detective chief Albert Seedman. Ten years later, he gave coauthor Peter Hellman the inside scoop on the murder that haunts a quiet corner of Kew Gardens, Queens—and the American conscience.

Seedman’s account of the investigation, now bookended by incisive new commentary from Hellman, is as gripping today as ever, and the plight of Kitty Genovese as chilling. When Seedman questioned the murderer about Kitty’s neighbors, he replied, “I knew they wouldn’t do anything. People never do. That late at night, they just go back to sleep.” If he struck today, would we prove him wrong?