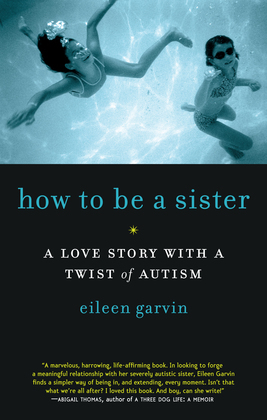 How to Be a Sister

Eileen Garvin's older sister, Margaret, was diagnosed with severe autism at age three. Growing up alongside Margaret wasn't easy: Eileen often found herself in situations that were simultaneously awkward, hilarious, and heartbreaking. For example, losing a blue plastic hairbrush could leave Margaret inconsolable for hours, and a quiet Sunday Mass might provoke an outburst of laughter, swearing, or dancing.

How to Be a Sister begins when Eileen, after several years in New Mexico, has just moved back to the Pacific Northwest, where she grew up. Being 1,600 miles away had allowed Eileen to avoid the question that has dogged her since birth: What is she going to do about Margaret? Now, Eileen must grapple with this question once again as she tentatively tries to reconnect with Margaret. How can she have a relationship with someone who can’t drive, send email, or telephone? What role will Eileen play in Margaret’s life as their parents age, and after they die? Will she remain in Margaret's life, or walk away?

A deeply felt, impeccably written memoir, How to Be a Sister will speak to siblings, parents, friends, and teachers of people with autism—and to anyone who sometimes struggles to connect with someone difficult or different.