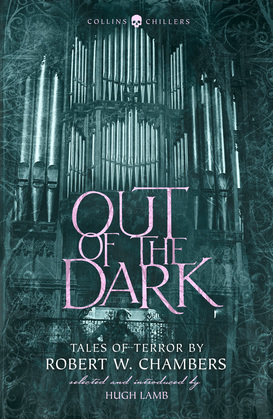 Out of the Dark: Tales of Terror by Robert W. Chambers (Collins Chillers)

For the first time in one volume, the best stories of one of America’s most popular classic authors of the supernatural.

Robert William Chambers’ The King in Yellow (1895) has long been recognised as a landmark work in the ?eld of the macabre, and has been described as the most important work of American supernatural fiction between Poe and the moderns. Despite the book’s success, its author was to return only rarely to the genre during the remainder of a writing career which spanned four decades.

When Chambers did return to the supernatural, however, he displayed all the imagination and skill which distinguished The King in Yellow. He created the enigmatic and seemingly omniscient Westrel Keen, the ‘Tracer of Lost Persons’, and chronicled the strange adventures of an eminent naturalist who scours the earth for ‘extinct’ animals – and usually finds them. One of his greatest creations, perhaps, was 1920’s The Slayer of Souls, which features a monstrous conspiracy to take over the world: a conspiracy which can only be stopped by supernatural forces.

For the first time in a single volume, Hugh Lamb has selected the best of the author’s supernatural tales, together with an introduction which provides further information about the author who was, in his heyday, called ‘the most popular writer in America’.