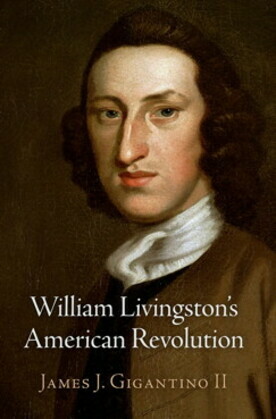 William Livingston's American Revolution explores how New Jersey's first governor experienced the American Revolution and managed a state government on the war's front lines. A wartime bureaucrat, Livingston played a pivotal role in a pivotal place, prosecuting the war on a daily basis for eight years. Such second-tier founding fathers as Livingston were the ones who actually administered the war and guided the day-to-day operations of revolutionary-era governments, serving as the principal conduits between the local wartime situation and the national demands placed on the states.

In the first biography of Livingston published since the 1830s, James J. Gigantino's examination is as much about the position he filled as about the man himself. The reluctant patriot and his roles as governor, member of the Continental Congress, and delegate to the Constitutional Convention quickly became one, as Livingston's distinctive personality molded his office's status and reach. A tactful politician, successful lawyer, writer, satirist, political operative, gardener, soldier, and statesman, Livingston became the longest-serving patriot governor during a brutal war that he had not originally wanted to fight or believed could be won. Through Livingston's life, Gigantino examines the complex nature of the conflict and the choice to wage it, the wartime bureaucrats charged with administering it, the constant battle over loyalty on the home front, the limits of patriot governance under fire, and the ways in which wartime experiences affected the creation of the Constitution.