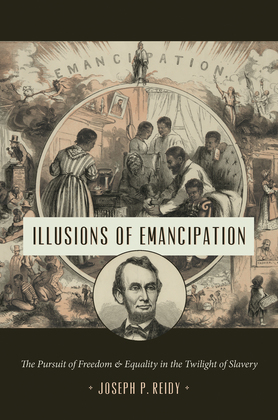 As students of the Civil War have long known, emancipation was not merely a product of Lincoln's proclamation or of Confederate defeat in April 1865. It was a process that required more than legal or military action. With enslaved people fully engaged as actors, emancipation necessitated a fundamental reordering of a way of life whose implications stretched well beyond the former slave states. Slavery did not die quietly or quickly, nor did freedom fulfill every dream of the enslaved or their allies. The process unfolded unevenly.

In this sweeping reappraisal of slavery's end during the Civil War era, Joseph P. Reidy employs the lenses of time, space, and individuals' sense of personal and social belonging to understand how participants and witnesses coped with drastic change, its erratic pace, and its unforeseeable consequences. Emancipation disrupted everyday habits, causing sensations of disorientation that sometimes intensified the experience of reality and sometimes muddled it. While these illusions of emancipation often mixed disappointment with hope, through periods of even intense frustration they sustained the promise that the struggle for freedom would result in victory.