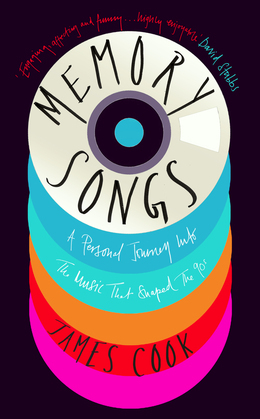 Memory Songs: A Personal Journey Into the Music that Shaped the 90s

This is the story of a music-obsessed boy’s journey from his bedroom in Hitchin to the heart of nineties London just as Britpop is about to explode...

From James Cook’s early encounters with pop’s pioneers – Revolver heard for the first time, Led Zeppelin glimpsed on evening TV – through an adolescence in which friendships are forged on a mutual love for the Velvet Underground, to the high-stakes gamble of moving to the metropolis, the years between the assassination of John Lennon and Kurt Cobain’s suicide are mapped in musical memories. Along the way, we explore the diverse influences that fuelled the nineties guitar pop boom, from John Barry to Bryan Ferry, and follow James as he forms a band with his twin brother and releases a critically acclaimed debut album.

More than a memoir, Memory Songs stands as a testament to music’s power over the imagination, the way it punctuates our past and shapes our future. Woven through with meditations on the artists who defined the UK's last legendary scene, it delivers a passionate analysis of the music that shaped a crucial moment in British cultural history.