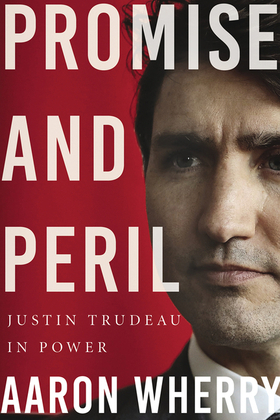 An inside, in-depth look at the leadership of Justin Trudeau, by a veteran political journalist

A must-read for all Canadians before the next federal election

Justin Trudeau came to power on the promise of “hope and hard work” and a pledge to seek a common good for all Canadians. From the outset, his critics called him naive, inexperienced and a danger to the economy. His proponents have touted his intentions for the middle class, the environment and refugees, which they argue have moved forward real change despite challenges and criticism. Veteran political journalist Aaron Wherry has extensively interviewed decision-makers, influencers and political insiders, from the prime minister’s closest advisors to cabinet ministers to the prime minister himself, to provide the most in-depth, inside examination—beyond the headlines and the tweets—of how Justin Trudeau has performed on his promises for Canada.

Promise and Peril: Justin Trudeau in Power explores how the Trudeau government has succeeded or failed in its biggest commitments—resource development, immigration, climate change, trade, reconciliation—against a backdrop of economic uncertainty, global political tumult and the roar of populist revolt. It reveals what was happening behind the scenes during the government’s most crucial and public moments, including:

Promise and Peril is a must-read for all voters before the next election. It examines whether a politician who came to office with immense potential has measured up to expectations—and what is at stake for Canada’s future at home and abroad.