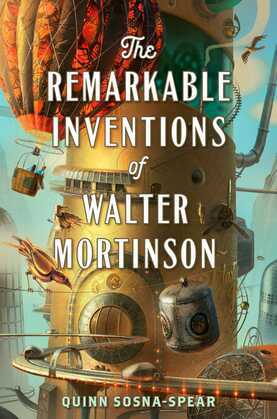 The Remarkable Inventions of Walter Mortinson

“Contains elements of Oz and Harry Potter with a healthy dollop of Willy Wonka thrown into the mix.” ?Kirkus Reviews

In this sweeping and inventive debut novel that’s perfect for fans of Roald Dahl, Neil Gaiman, and Tim Burton, a prodigal inventor flees his home to find his destiny.

In the humdrum town of Moormouth, Walter Mortinson’s unusual inventions cause nothing but trouble. After one of his contraptions throws the town into chaos, Walter’s mother demands he cut the nonsense and join the family mortuary business.

Far off on Flaster Isle, famed inventor Horace Flasterborn plans to take Walter under his wing, just as he did Walter’s genius father decades ago. When a letter arrives by unusual means offering Walter an apprenticeship, it isn’t long before Walter decides to flee Moormouth to meet his destiny.

Walter runs away in the family hearse along with Cordelia, the moody girl next door with one eye and plenty of secrets. Together they journey through a strange landscape of fish-people, giantess miners, and hypnotized honeybees in an adventure that will not only reveal the truth about Walter’s past, but direct his future.