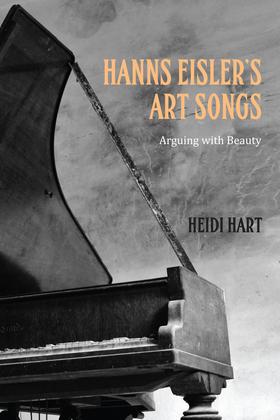 Best known for his collaborations with Bertolt Brecht, composer Hanns Eisler also set nineteenth-century German poetry to music that both absorbs and disturbs the Lieder tradition. This book traces Eisler's art songs (German: Kunstlieder) through twentieth-century political crises from World War I to Nazi-era exile and from Eisler's postwar deportation from the U.S. to the ideological pressures he faced in the early German Democratic Republic. His art songs are presented not as an escape from the "dark times" Brecht lamented but rather as a way to intervene in the nationalist appropriation of aesthetic material.
The book follows a chronological arc from Eisler's early Morgenstern songs to his Lied-like setting of Brecht's 1939 "To Those Who Come After" and his treatment of Hölderlin's poetry in the 1940s Hollywood Songbook; the final two chapters focus on Eisler's Goethe settings in the early GDR, followed by his late Serious Songs recalling Brahms in their reflective approach. In its combination of textual and musicological analysis, this book balances technical and lay vocabulary to reach readers with or without musical background. The author's practicalperspective as a singer also informs the book, as she addresses not only what Eisler asks of the voice but also the challenge of evoking both intimacy and distance in his politically fraught art songs.

Heidi Hart holds a PhD in German Studies from Duke University. She is an instructor in the College of Humanities and Social Sciences at Utah State University.