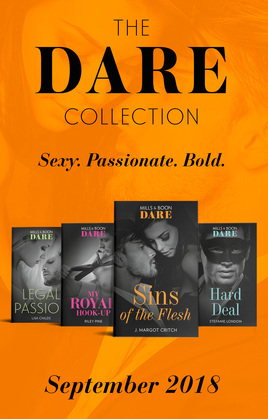 My Royal Hook-Up by Riley Pine

A memory of one night. Enjoying absolute pleasure!

I am the banished prince, the scoundrel. So deflowering the enemy’s princess should be right up my alley. And when sweet, naïve Juliet asks for one night of passion, I can’t resist making her beg. Her silky touch captures me, compels me beyond thought. But her cries of ecstasy may just be my undoing…

Sins of the Flesh by J. Margot Critch

When it comes to sexual politics…they’re playing dirty!

The mayorship of Las Vegas is down to two candidates, and Jessica Morgan is ready for a fight. Golden boy Rafael Martinez is a successful businessman—and a wickedly sexy egomaniac. He may be her opponent, but there’s something so irresistibly hot between them! Then all it takes is one little leaked sex tape to turn this election into a Sin City sensation…

A deal with the devil…But who comes out on top?

Imogen Hargrove agrees to go on a date with the infamous Caleb Allbrook if he’ll dig up dirt on her sister’s cheating fiancé. After leaving her own two-timing ex, Imogen is determined to save her sister from heartbreak. Caleb might be tempting…seductively charming, even. But Imogen won’t make the same mistake twice: no more playboys!

Hotshot lawyer Stone Michaelsen never loses a case, but rival Hillary Bellows is determined to beat him in court. When they’re alone together, the gloves—and clothes—come off. Uptight in court yet naughty in private, they can’t keep their hands off each other, and their jobs are on the line. Real feelings emerge, raising the stakes and turning sexy sparks into a roaring fire!